No avoiding it. Every year in the Judeo-Christian influenced world, it hits like a tsunami. Starting from early hints in September, gradually building momentum in October/ November, until the tidal wall of commercial frenzy crashes down upon us in December, leaving us bedraggled, stuffed, dazed, our waistlines larger, some relationships frayed, and our credit cards maxed out by Boxing Day.

Even my clients who tell me they’re avoiding it can’t get away from TV commercials, ads in cinemas, lights and baubles in every themed shop window and shopping centres, carol music everywhere, lights and sometimes outright creepy garden decorations and figures, Xmas themes the kids bring back from end-of-year school activities. Did I mention a fat guy in a suit who looks like he’s a candidate for a coronary, hugging a line-up of kids on his lap in shopping centres? Coming from a background of child protection focusing on child sexual assault, that feels too close to grooming for my peace of mind. Not to mention the dramatic increase in junk mail, stuffed daily in the post box every day and in the local paper. No one mentions carbon footprints at this time.

I don’t own a TV. But even with my limited use of technology, I still get bombarded with Xmas-themed ads. There’s no escaping it.

I wondered the other day: if I were a visiting alien who landed in Sydney, Australia, for a week while I did essential repairs on my spaceship, what would I conclude this frenzy was about? 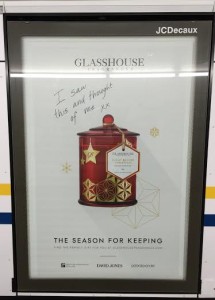 Based on what I’m seeing and hearing all around me, an alien might decide Xmas is mostly about being exhorted to spend lots of money (whether one has it or borrows it) in order to buy lots of stuff; to buy and eat lots of food (most of it sweet, fat, highly processed, and highly packaged); to buy and consume lots of alcohol because it’s ‘cheap’; quickly buy stuff to make one’s living space look different/ ‘great’ by Xmas; to buy lots of technology/ jewellery/ toys/home equipment to ‘show’ our love to people in our lives (apparently, buying stuff equals ‘love’ in this land); to buy lots of other, smaller stuff (cheap and nasty/ flashy/ mindless/ food/socks and undies) to literally stuff stockings or wrap in lots of paper and give to people who already have lots of stuff so we can all feel we have had lots of stuff. Apparently the buying is mandatory, irrespective of whether one likes the people one is buying for or not. The alien might observe that the financial value of the stuff often has to match the receiver’s perceived status in one’s clan. It’s okay to get chocolates for the neighbour across the road, but it’s an insult for your mother in law.

It’s also about something termed ‘spoiling’ oneself- in other words, a reason to buy stuff for oneself as well, in the name of making one’s self feel good.

In some places the alien notices, there are odd farmyard scenes on display- figurines of a man and woman dressed in non-urban garb, a baby and some farm animals. They’re important to some people, apparently. When it discreetly asks about this, the alien is told the little guy will end up tortured and on public display later when he grows up. Oh? Deciding wisely that this is getting too complicated, the alien returns to pondering the meaning of Xmas. The alien doesn’t really get where this scene fits in with all the stuff and decorations and lights. But it seems it has to do with what people who believe in something called ‘spirituality’ or ‘religion’ value. But the alien can’t work out what that has to do with the orgy of stuff being peddled all around. It speculates that maybe the devotion to ‘stuff’ might be an emerging related religion?

That seems about right.

Everywhere, the alien sees representations of animals, people, and weather that look nothing like what he sees Australia actually looks like in December. Kings, elves, reindeer, now, snowmen, quaint little village scenes with people all rugged up for the cold. Plants with little red balls and spiky leaves. It notices some delivery or courier guys called Santa are everywhere. The alien learns these guys apparently fly at night in a sleigh pulled along by reindeer who deliver presents and have to do it through the chimney. Which must be hard because they’re all overweight and overdressed and old. It ponders: what do people who don’t have chimneys do? There seem to be lots of Santas, despite the fact that people keep referring to Santa as though there is only one. The alien works out that what’s so important about this guy is stuff – Santa doles out stuff. Fortunately, the Santas seem to have logistic teams called elves, apparently, to help organise and pack the stuff. That’s odd enough until the alien occasionally sees a representation of Santa in board shorts on a surfboard, or pulled along by flying kangaroos. Really?

But the alien also notices that Xmas is not just what the hype suggests.

Beneath the clamouring, the bright lights and decorations, the brightly coloured paper and ribbons, the Santas and the stuff, some discreet eavesdropping reveals that tension exists for  many people around certain themes every year.

Repeatedly, the alien overhears that there’s some issue over who ‘hosts’ the prestigious and dreaded Xmas gathering- an odd mix of a high status role, with a lot of work, expense and the inconvenience of not being able to kick everybody out to get your space back when you’re over the whole thing.

The alien notes that there seems to be a lot of high-pressure meaning invested in who is invited to come to which Xmas event, and who misses out or chooses (gasp!) not to attend. It seems that many families work out elaborate plans to divvy up Xmas day to ‘keep the peace’, with scheduled present opening times, Xmas breakfast, Xmas lunch, and Xmas dinner obligations usually associated with different geographic locations and carefully thought-out time allocations. It concludes – it’s all a bit mad, really. 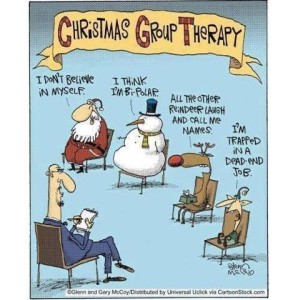 Every year, I fantasise about running a Xmas boot camp. “Surviving Xmas”, I’ll call it. I imagine holding a 2 to 3 half-day workshop designed to equip attendees to face this tsunami and bravely swim their own way through the oncoming waves. I’d then conduct a half day ‘Xmas recovery’ workshop to follow about 4 days later.

Heresy! Indeed. The etymological meaning of ‘heretic’ was ‘he/she who chooses’. I want to support people to (re)introduce choice into their Xmas experience. How would it be to actually choose-

If you feel like spending the day or part of it with anyone,

If you have kids, or want children around you on that day,

If you wanted alcohol to be part of the gathering, or other drugs –

When would you deem that enough was enough- that good things do, and in fact need to come to an end? Would you be willing to plan for/ respond to changing signals from yourself and from those around you to really respect when ‘enough’ means it’s time to stop, to leave, or ask people to go, rather than wait until there are tears of cross words?

And if this was to be your last Xmas on earth- Do those in your life know what they meant to you  based on how you treated them in the lead up to Xmas? Do you feel this last day was a day well spent? How will you gauge that?

If you want to plan better for the next Xmas tsunami, or feel you might benefit from a recovery conversation about Xmas and your part in it, contact me.