New Year’s Resolutions 2016 ~ Making the Speed Bumps on the Road to Change Work For You.

Every year, I hear that tired old refrain: “I’m going to be different”, “Next year, I’m going to ..”, and out comes a list of things that whoever it is that is telling me declares they will definitely do “this time”. They seem sincere enough at the time.

So why is it that, within a maximum of two to six weeks, most of the loudly declared New Year’s resolutions I hear about are long gone, as if forgotten? What does it mean when someone says, “this time”? Does that mean that the last time they told me “this time”, they didn’t really mean it? Is there a way for anyone to tell when “this time” really means they will make the change, and when is it just a mere turn of phrase? How can we personally increase our own trust in ourselves that we really will make it happen when we say “this time”?

I’ve written elsewhere about the stages of change and the advisability of knowing where one is in relation to actually making a move to change, because making a change requires a lot more than saying you will and acting on that (1). It requires a certain amount of self knowledge in terms of what your reasons are for wanting to make the change, and making sure you are making the choice because you want to do it (and not just in reaction to someone else’s pressure, threat or pleading). It requires being realistic about what making that change will ask of you over time, and what sort of plan and supports you will need to have in place to make the desired change not only happen, but remain. It requires planning for times when you won’t want to make the change or stick to your plan, and planning for the way your life will need to be different if the change you say you want is to become the new normal in your life, rather than have your old habits take over again.

All of which spells out ‘choice architecture’ – the design or environment created around a choice or series of choices that either make making that choice easier or harder. This term was coined by Thaler and Sunstein (2). They refer to whoever creates the context for choice as a ‘choice architect’. Each one of us, when we make a decision to make a choice, be that to do something (e.g. exercise) or not do something (e.g. stop smoking),  are the architects of our choices.

As in architecture or engineering, in designing a building or a road, there are key aspects that have to be taken into account if the structure is to be sound and have durability. The same idea applies to how we design our own choices and the context we enact them in. Speed bumps are my kitchen-table contribution to this discussion. Here’s how I see them apply:

a) for those things you want t 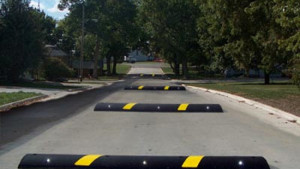 Let’s consider what that means in practice. The first thing to examine when considering speed bumps is this: is this a decision you make as a one-time permanent decision, or is it a decision you’ll make each day as you go along? If you have to make the decision anew each day, on a case by case basis, then you increase exponentially the chances and opportunities to derail your decision to make the change you want.

Think about how an effective dental hygiene routine works: the person who has one has usually made one decision and one decision only. It goes something like this: “I want to have as many of my own teeth as I can possibly hang on to by the time I die. So, I will floss very day and brush my teeth twice/ three times a day, morning/ lunch/ dinner.” The decision is context-proof, excuse-proof. That means, no matter what happens, whether I am in love, sick, drunk, exhausted, have worked late, or whatever, the decision acts as a safety net barrier that guides my actions. There is no decision to be made – it has already been made.  Therefore I brush and/or floss my teeth when I said I would. There are no exceptions, and the issue of having to consider whether I will attend to my teeth never arises. The prior decision is a pre-decision decision. 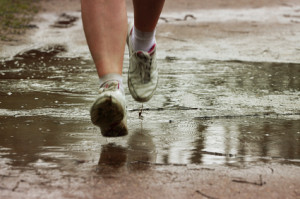 In contrast, the person who decides to exercise and then asks themselves each day –do I feel like it? Is it cold? Is it humid? Am I too tired? Is it raining? is opening up the ground each time for a chance to say ‘no’ to their decision to exercise as they weigh up any and all of these considerations. Ask anyone who has an effective exercise routine, they will tell you- there are many times they don’t feel like getting up out of bed and going for a run or to the gym; there are many times they feel it’s too cold and miserable out there to get out, or they’re too tired. What gets them out there is the safety net of the pre-decision decision.

Making the Speed Bumps on the Road to Change Work For You.

So, we can look at the speed bumps idea in even finer detail and literally put speed bumps in our way, or sweep them out of our path, as required, depending on the kind of decision we propose to make. Here are some examples of what this might look like. 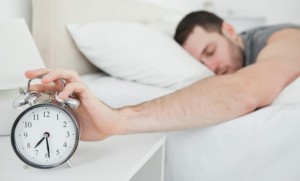 Is your New Year’s resolution to exercise more? Then consider how you can make it as easy as possible for yourself to achieve this. You might have your gym gear and shoes ready to put on in your room near the side of your bed, so you wake up and literally bump into them, or you might have your gym gear packed in a bag at the door with your work bag. You might set your alarm for the right time to get up and move the alarm out of arm’s reach so you can’t hit the snooze button (extra speed bump where it counts).  You might decide on a type of exercise that will reduce the number of possible excuses you might use not to exercise: it might initially be a walk around the neighbourhood that you gradually extend; it might be an exercise bike in the garage; it might be a run with a fitness buddy you know you’d hate to let down. It might mean a gym membership at a 24 hour access gym near your home or work, or even at work. It might be a yoga class right after work, at a gym next door. Basically, the fewer the ‘speed bumps’ you have to deal with on the way to doing the exercise, the more chance you will have of fulfilling your decision to act on this change you say you want.

Is your New Year’s resolution to drink less alcohol? Again, a series of pre-decision decisions will be of huge benefit in assuring your success. Decide ahead of time – what and how many days you will have alcohol-free, and stick to those. You might decide how many standard drinks you will have in any one week, and spread over how many days – and stick to that. You might decide how many standard drinks you will have in any one day, and again, stick to that. When you do drink alcohol, alternate your alcoholic drinks with water, one for one, or even two of water for one of alcohol. Consider making your house/ apartment an alcohol-free zone for a period of time. Consider which friends you hang out with when, and how they are likely to impact your decision to control your alcohol intake. If you know some people are likely to undermine your choice, then consider not going out with them one on one, and leaving a group if they start to pressure you.  And no matter how well (or otherwise) you’ve stuck to your decision, make a pre-decision decision to write down how many standard drinks you consume each day.

One of the things that Cass and Sunstein talk about is the fact we can be nudged into making changes that are good for us, in ways that gradually grow on us. Australia changed from a cigarette-addicted society in the 1950s to a place where about 12.2% of the population smoke today. That’s a 50% drop since 1991. A lot of that was due to the Federal Government choosing to implement a number of ’nudge’ strategies. These included taxes on tobacco products, and making all sorts of environments non–smoking places: Government department buildings, bars and clubs; domestic and international flights; restaurants and public transport. Gradually, as more and more ‘speed bumps’ arose in the path of smokers, it became easier not to smoke than to smoke in an increasing number of places.

You can do the same thing for yourself. This New Year, think about what it is you would really like to change in your life. If your New year’s resolutions involve some sort of behaviour, then consider –

And if you decide that you’d like some help in making those changes you think about, and not make one more resolution you’ll only hate yourself for failing one more time, contact me.