Towards the end of the last calendar year, I found myself in the grip of a powerful urge to clean up my affairs on all sorts of levels; that sense of housekeeping urgency has followed me into the new year. 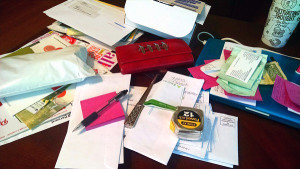 When it comes to spring cleans, culling things and the like, I’m more like Jennifer McCartney and Jennifer Palmer [i]than Marie Kondo [ii]. Unlike the usual feel for New Year’s resolutions, this clarion call feels different. I am tired of feeling like I carry the weight of unfinished tasks and mounting piles of ‘stuff’ I have accumulated for some time. For once, I feel a very strong desire to do something – finish things, clean things, clear things out, cull and get rid of things. I have a strong sense of not wanting to start 2017 in the same administrative state as the note on which I ended 2016.

On reflection, this uncharacteristic urge to engage in housekeeping has in large part been influenced by watching a close friend (let’s call her Kate) get her own affairs in order as she prepares for her death from ovarian cancer. Over the past two years, I have watched Kate get rid of and give away all sorts of things until very few possessions remain. This has been the most efficient and comprehensive approach to getting one’s end-of-life affairs in order I have ever had the privilege to witness.

I have watched fascinated as Kate calmly, systematically, thoughtfully and meticulously worked her way through layer after layer of papers, possessions and books, and made choices about the relative worth of each item and how to dispose of each one. I was the fortunate recipient of some of Kate’s generosity, and in turn, I observed her generously share what little she had with those she thought would either appreciate it most, or whom she thought might be most in need.

Earlier in 2016, in the heat of a Sydney summer, one of the clients we had shared found herself without a working refrigerator and no means to replace or repair it. It was Kate’s generosity that enabled our shared client to purchase what the client came to see as ‘the best fridge in the world‘.  Given that Kate is a nun, money isn’t exactly something she has a lot of. Nevertheless, as she often did over the course of the many years I have known her when a worthy cause presented itself before her, Kate sourced the money needed overnight and a fridge was bought and delivered within forty eight hours.

Kate’s generosity of spirit has always struck me; I have been awed by how it has intensified in the last two years of her life as she nears her end. With care and deliberation, I have seen Kate systematically divest herself of anything and everything that might have ever meant anything to her. Books, stuff mostly, but also personal effects. On one occasion, Kate handed me a satellite navigation device for a car, saying to me with a grin, “I won’t be needing it where I’m going.”

Kate systematically made time to go and visit key people in her life while she had the physical capacity to do so, and she did her best to resolve outstanding conflicts with a few folk in her life. As her health declined, Kate radically reduced her social engagements, keeping her energy for a few key people. Kate risked offending some people by refusing to get caught up in social obligations that she found no longer important.  Now at last, she chose to put herself first.

I prioritised spending time with Kate over the last two years, wanting to make sure I spent as much quality time with her as I could before death claimed her and took away my options. In doing so, I feel I have been given very precious teachings that I doubt I could have learned any other way.

I saw the power of being unattached to possessions. While my friend had accumulated a fair number of books and resources over time as a practitioner in a number of health-related fields she worked in for over fifty years, she divested herself of all of them, layer by layer.  When it comes to my professional books, I have been a cross between an addict who compulsively buys books, and a fiercely possessive junkyard dog, guarding every inch of its territory. The thought of culling my books has had the power to send me into something akin to a panic attack.

Over and over, I have seen the primacy of the importance of being present in relationship while we still can, even when there are many essential and urgent logistical issues crying for our attention.  As Kate’s physical strength dwindles more and more, the need to do something together, and eventually, the need to talk has become less and less important. Instead, we have taken to sitting together quietly, exchanging an occasional remark or joke.  Many things don’t seem to be so important that they need discussing anyway. More recently at her bedside in hospital, I sit with her hand in mine while she lies back on her pillows with her eyes closed.

Over time, as her illness has progressed and Kate has experienced greater pain, discomfort, loss of strength, and severe restriction to her mobility, I have not heard her complain. Instead, she has told me on several occasions that she feels she is more fortunate than others who suffer more than she has. “It could be much worse”, she assures me.

As Kate’s dependency on others increases, her various roles and identities have fallen away: as a worker, as a strong and independent woman, as an active participant in a number of vibrant communities, as an intensely private person, as a person in robust good health and as a person who made most of her own rules and was mostly only accountable to herself.  Any previous status she might have derived from any one of those identities has had to be surrendered, centimetre by centimetre. The boundaries of pride, privacy and dignity have gradually been stripped back, leaving a vulnerable human being in need.  Kate has borne these harsh changes to her circumstances with grace and, much of the time, good humour.  As her dependency on others increases daily, so does Kate’s gratitude in recognition of others’ thoughtfulness, kindness and care.

Kate’s clear sighted acceptance of her increasing physical deterioration, and the imminent end of her life are arresting. Where I continue to struggle with accepting the inexorable reality that soon, she will no longer be a part of my life, she seems totally, congruently, matter-of-factly accepting of this fact. Her faith in her god and her religion seem to be helpful to her, whereas I flounder about internally with what seems to me to be the senselessness of her suffering, and my pain and bewilderment in the face of what is to soon be her permanent absence from my daily life.

This experience is showing me so much about myself  – my ego, my attachments to things that don’t really matter when one gets to the end of the road, how much I define myself through roles, certain skills, and aspects of my personality. I find myself saying less in certain parts of my life where I have been used to having a voice, but not because I feel gagged. I just feel less need to register an opinion.  In other areas, I feel a strong urge to write down thoughts I haven’t had the courage to voice before now.

I find myself making better choices about self-care because I have a renewed appreciation for my health for however long it is mine to have.

I find it easier to divest myself of stuff and yes, even books – after all – do I really need to have all those books around me? I now question what is served by me hanging on to so much stuff. A lot of the time, it seems what is being served is some image I hold of myself. I currently see just how fragile and insubstantial any image I hold of myself really is. I want to act while the lesson is fresh and hope by doing so, it will remain fresh in my mind.

I have made a point of letting the people in my life who matter know just how much they mean to me. I am in the process of working out how I can tell others with whom I have outstanding matters, that they too matter – even if I haven’t known how to clear things up between us until now. Even if I still don’t know how to just yet.  I want to get my housekeeping in order.  It’s time.

I sit with Kate as often as I can – day in, day out. I do my best to show up, to be present so she can feel my love and support even when she drifts off to other worlds where I may not follow her. Yet. I want her to be able to touch back into that love when she returns briefly among us if she chooses. I want my friendship and care to play whatever part they might be able to in helping her in this last grand adventure on which she is embarked.

I know I am becoming a better housekeeper for it.

If you too feel the need to attend to your own housekeeping, and you can feel the emotional ties that hold you back, stopping you from doing what you know you need to do, ask yourself –

And if you think you might benefit from talking to someone who appreciates the need to get one’s emotional affairs in order, call me.

[i] Jennifer McCARTNEY and Jennifer PALMER (2016), The Joy of Leaving Your Sh*t All Over the Place : The Art of Being Messy, Norton &Co

[ii] Marie KONDO, (2015), The Life-Changing Magic of Tidying Up : The Japanese Art of Decluttering and Organizing, Thorndike Press.