She’s gone. My friend of almost thirty years’ standing died on February 10, 2017, after a protracted battle with ovarian cancer.

As I continued to prepare for the death of my dear friend (Kate), I was struck by the similarities between what I went through and what I and other people I know experience after an unwanted relationship breakup. In both situations, we are being left, and we also need to let the departing one go. Both are true.

Whether the loss is sudden – we are left by a partner, someone dies suddenly in an accident – or more prolonged, as when a loved one dies a lingering death over a period of months, or a partner takes months to make up their mind and leave, we, the left behind, need to learn to let go on our side.

I’ve written elsewhere of how awed I am at the way Kate handled her imminent departure from this earth.

Well, I can see that I went through a similar process of letting go in relation to her and other relationship losses myself.

In the last few months of Kate’s life, I made a point to tell her what she meant to me over the nearly thirty years of our friendship. While I often expressed my love and appreciation for her over the years, I wanted to make sure I left nothing loving unsaid.

I made a point to write my feelings of love and appreciation in a card I gave her when she was still conscious and able to talk with me about what I wanted her to know. It was important to me to try to put into words what she has given me, to tell her that she has been central to my wellbeing, what I’ve learned from knowing her, from our many deep philosophical conversations, as well as from seeing her go about living her life. 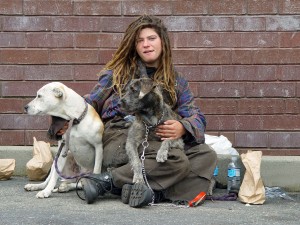 In life, Kate not only professed to hold certain values, she lived them. Every day. As a woman committed to religious life, I had a front row seat opportunity to see Kate live out her values. No homeless person, no drug addict passed by her without some kind of acknowledgement, some help if they asked for it or if she saw a chance to assist them in some way. She was known to sit and talk with them wherever they were, including sitting on the side of the road in the gutter. Kate referred to street people as JIDs: Jesus In Disguise. To her, every person she encountered was a JID. From that standpoint, it followed for her that she must do all she could to acknowledge them, include them, make them feel welcome, advocate for them, treat them as equals, share whatever she had and help them materially in any way she could.

The people Kate acknowledged and helped in these ways didn’t have to change to fit her expectations. Anything she gave was a true gift, and had no strings attached. I sometimes wonder how many people may have given religion a second thought just because of their encounters with Kate. Hers was a lived spirituality, her love and support freely given.

After a breakup with a romantic or life partner, we are similarly challenged. Can we still love the person as they walk away? Can we commit not to shut down our heart, get stuck in hate, resentment or revenge towards  them because they left us, or because they are treating us poorly?

While there were times when I know Kate was scammed by some of the people she assisted, she didn’t seem to be bitter about it, nor did it seem to make her curb her generosity. She saw their actions as part of their suffering, a sign of how tough things must be for them. And she didn’t close her heart to others after a bad experience. She was able to simply let go of what had happened and continue to have compassion for the person who had taken advantage of her.

I found it very hard to accept that anyone could genuinely feel like this, see the world in this way.  In my family, we were, raised on the eye-for- an-eye, tooth-for- a-tooth, repay-with-interest life creed. Kate’s response to being taken advantage of, scammed, disrespected or abused was a mix of prayer, boundaries, compassion and more love. Inconceivable to me when our friendship began. 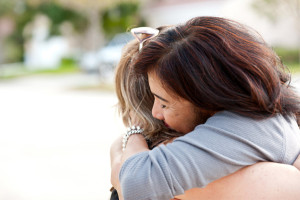 We had many conversations about forgiveness. Needless to say, the concept was totally foreign to me when our conversations started. Gradually, however, seeing how Kate handled betrayal and hurt in relationship over the course of our friendship, I began to glimpse something of the way she saw forgiveness. Kate saw it as part of freeing herself from ongoing pain from something that has already happened and could not be changed. To her, holding on to pain, resentment and the desire for punishment / retribution was a way of yoking ourselves even more tightly to the perpetrator, the events that happened and keeping the pain going. She saw no sense in it. To Kate, to forgive was to free ourselves from the bondage of our pain and resentment.

After a particularly acrimonious break up, I saw myself as “the injured party”, I struggled to forgive either of us. The longer I stayed in my “they-done-me-wrong” position, the more time passed with no sign of them “owning” what they had done to hurt me or apologising for their part in the mess we were both left with, the more bitter and stuck I felt. I was caught in a trap of my own making. I couldn’t orient myself to a new life of my own choosing, yet I felt I couldn’t do other than what I knew. I went on like that for months.

Eventually, with the help of loving-kindness-meditation practice, reflections in my journal, therapy and many conversations with Kate, I began to see my former partner as trapped in a dark world of pain, bitterness and terror. A world that had existed long before I came along. I started to think of behaviours that had seemed to be specifically aimed to hurt me as the product of pained thinking. Gradually, I began to separate myself as the recipient of these vengeful behaviours from taking them personally. In time, I came to see that the behaviours had little to do with me. I saw that person was caught up in a private nightmare that offered only one option – to act as destructively as possible. As Michael Yapko likes to say, “We can be very, very sure, and be very, very wrong”. They were very, very sure. So there was never going to be any room for anything that contradicted those views.

Once I got that far, forgiveness didn’t seem so far out of reach. Today, while I’m not yet where I would like to be in relation to that person, I can honestly say I’m much closer to letting go of my injured-person status and getting on with my life than I ever thought I would be. Nor have I come to subscribe to a you-can’t-trust-anyone, everyone-is- out-for- themselves view of people. My faith in human nature has slowly returned, and I am at peace, and able to see beauty in people, and love and trust again. Kate is a large part of what got me to this point. 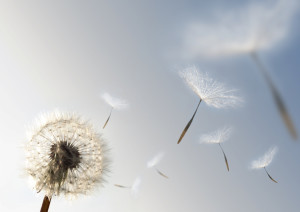 To get here, I had to really practice letting go. Letting go of the dreams I had of what we might have been. Let go of the over idealised image I had carried of that person that they couldn’t live up to. I had to let go of my innocent victim view of myself, and own the many times I chose to turn a blind eye to things, re-wrote reality to fit my fantasy version of our relationship, and all the ways I betrayed myself in the name of trying to be more understanding, more loving. Actions that were really, not wanting to look reality in the eye. Not wanting to face up to some tough decisions I would have had to make had I let myself see things exactly as they were unfolding and set appropriate boundaries.

In the process, I’ve been letting go of my shame about my part in that breakup, my refusal to look reality in the eye until I had all but lost my dignity and self-respect. My shame for over-staying, for not standing up for myself. My shame for accepting poor treatment. That, of course, has led to me loosening some of my grudge against myself. Which, in turn, has led to me learning to have more compassion for my younger self and forgiving myself, and being at peace with myself.

These are just a few of the many riches that my friendship with Kate brought into my life. I can truly say my life is immeasurably richer for having known her. As a person, I know I’m a better person for having had her as a friend.

Letting Kate go to the great mystery of Death is one of the hardest things I’ve had to do in my life. I see I have two choices – I can protest and rail against the injustice of a life cut short too soon. Or I can give thanks for the joy and immense richness that having known her has brought to my life, honour how she lived and chose to face her death and surrender to what is. And give thanks for the privilege of knowing her and the time we had together. And honour her contribution to my life through how I choose to live every day.

If you find yourself in a hard-to- let-go spot, you might ask yourself-

1. How are you seeing yourself? As the innocent victim? The bad person?

2. What is the story you tell yourself about the situation you’re in, how you got there, and what the future holds for you? Write it out, and read it through.

5. Apart from the cost to you of not letting go, who else stands to lose if you don’t?

6. If you were to choose to let go, what support would you need to at least begin the process?

Consider a course correction and consider moving towards letting go. A brighter life depends on it.

And if you think you could use some support in getting unstuck, contact me.