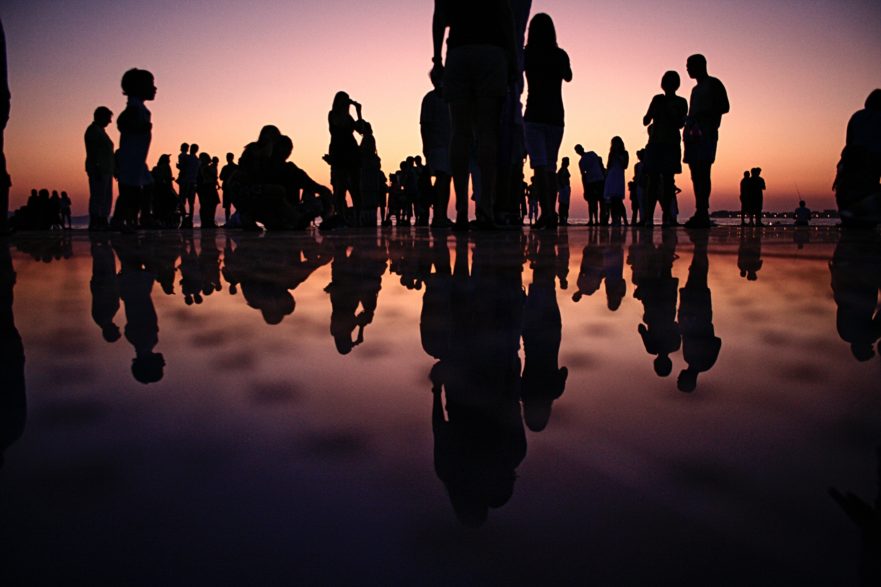 Connection – what does it even mean? 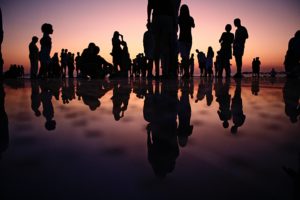 Photo by Mario Purisic on Unsplash

In our modern era, we are constantly told we are ‘always connected’.  We’re expected to be ‘always connected’, and to want to be that way. But what does that even mean? Thanks to technology, there’s almost always any number of ways that we remain connected to and accessible by others in our lives near and far. Whether it’s email, phone, voice mail and voice memos, instant messaging services, blogs and vlogs, social media, and any number of apps and websites, we’re never more than a tap on a screen or a keyboard away from ‘connecting’.

But what is that connection REALLY? And what is that connection really worth? When all the hype about the importance of being connected, the sense that all sorts of people and groups we have or have ever had ties to (weak or strong) are present and ever-available to us (and us to them), when that sense of our lives’ minutiae being known and visible to so many people and theirs constantly being made known to us, when the sense of being seen, the sense of needing to respond to the never-ending influx of information about the lives of others, when the artificially drummed up sense of importance and urgency to know, to not miss out are set aside – if we even can set it aside or ever do, that is – how real, how satisfying is/are those connections? 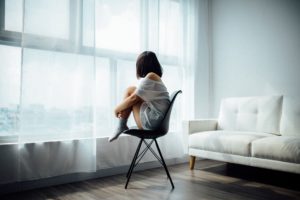 Photo by Anthony Tran on Unsplash

Research over the past forty years has shown that the number of people that people in Western nations feel they can turn to in a moment of need has dropped significantly. As a result, loneliness is thought to be worse than it has ever been[i]. In the 1960s, on average, people said they had 3 to 4 people they could talk to about important matters; it’s dropped down to 2. Today, the most common number of confidants people reported in the US has dropped to none. That seems incomprehensible, particularly when we are seemingly more connected to others than ever.

And yet, research on the impact of social media and screen usage on people’s mental health and happiness increasingly paints a sobering picture. As we spend more and more time on our devices, mindlessly scrolling or swiping constantly, people consistently report a combination of feelings that I hear echoed every day in my practice in ways I didn’t hear 20 years ago.

People report-
high levels of dissatisfaction; a constant sense of wanting something but not knowing what; a sense of not feeling satisfied with what they have/ that it’s not enough/ not as good as what other people have; constantly comparing themselves with others and competing with them; feeling either less than or  feeling like their momentary sense of superiority is precarious and that they are liable to be pushed off their top polling position at any moment.

In the dating world, the swipe culture seems to have replicated this sense of competition, of needing to curate oneself for a market, but also contributes to people never quite feeling satisfied with who they’re with. They tell me, “maybe I could do better” and cannot bring themselves to choose and explore what might be possible fully with one potential partner,  and so they keep on moving restlessly on to the next one. Not surprisingly, many fear their partner might also think that way about them.

People tell me they feel bad when they look at social media and see friends and others living their so-called “best lives” somewhere – looking gorgeous, fit and desirable, surrounded with people who love them, in glamorous locations and/ or beautiful surroundings, looking carefree, surrounded by lots of beautiful things at hand. People tell me, those others  seem to be either setting the trend for what the next big thing will be, or they’re doing what the current big thing is.  While they are not.

In contrast, many of my clients tell me they feel unattractive, ugly, undesirable, lonely, depressed and stuck in less than desirable jobs, homes and relationships. And yet, they return to the various social media platforms on their screens, gorging on the endless streams of pictures and articles, even as these continue to make them feel bad. I’m reminded of the descriptions women who suffer from bulimia give me of bingeing on massive quantities of foods they no longer taste or even like, past the point of physical pain. Pausing only to return again to the fridge or the cupboard to consume more.

Caroline Beaton argues that the Internet ‘makes us lonely’ because “ we attempt to substitute real relationships with online relationships. Though we temporarily feel better when we engage others virtually, these connections tend to be superficial and ultimately dissatisfying.”[ii] No matter how much people might want to think otherwise, online social contacts are not an effective alternative for offline social interactions[iii] .

What is this all about?

Photo by Thought Catalog on Unsplash

I recently finished Jaron Lanier’s book “Ten reasons to delete your social media accounts immediately”[iv]. Lanier, a tech expert who hails from Silicon Valley, a musician, philosopher, and keen observer and concerned commentator about the impact of technology on quality of life, makes a solid case. He demonstrates that, through the gathering of all sorts of data consumers freely provide on social platforms, business and Government bodies are able to purchase information that is then able to be mined and tweaked for advantage and profit.

Through personalised algorithms, consumers’ behaviour and preferences are initially tracked and mapped. Then, our responses and preferences are gradually shaped to increase the probability that we will go along with whatever the purchasers of our data  want us to support. Lanier refers to this as a business model that’s currently operating across the main social media platforms. He refers to it as BUMMER: Behaviour of Users Modified Made into an Empire for Rent. Clever. Chilling.

Whether it’s buying socks, or being discouraged (or encouraged) to vote, feel sad or feel compelled to express our inner troll; sign a petition to push for some sort of change, or gradually have our existing views of another social group reinforced, intensified and polarised, Lanier argues that we are all becoming increasingly alienated from one another, even as we are being persuaded to see the world as more and more polarised rather than as complex as it actually is. Lanier points out that, thanks to the pervasiveness of personalised so-called news feeds, we no longer see the same world as our neighbour. Gradually, we all seem more and more crazy to one another as we become increasingly unable to know what context we are each reacting to, each of us merely ‘seeing’ what’s presented to us and taking that to be the whole story.  In effect, we all lose any sense of the wider context in all of its complexity.

Meanwhile, Lanier chillingly points out, our attention is captured and mined for advantage or profit.

I’m reminded of Pixar’s visionary film Wal-E[v]. In the film, rows and rows of passengers on a space ship presented as an “endless holiday cruise” sit for hours transfixed in their seats, watching screens inches in front of their faces, mindlessly reaching to grab at food or drink placed next to them by robots, never talking to or making any contact with anyone, not even their immediate neighbour sitting next to them. The only activity the passengers engage in is whiling away the time by passively consuming endless entertainment on their screens. 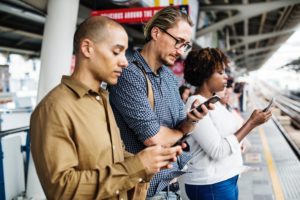 Photo by rawpixel on Unsplash

Wal-E struck me as visionary when it was released in 2008. While our screen addiction wasn’t as widely recognised then as it is now, Pixar’s film captured the kind of alienation we were heading towards. Shortly afterwards, Sherry Turkle released her cautionary book “Alone together”[vi]. Turkle, a long-time supporter of AI developments and researcher at MIT who has studied the impact of technology on everyday life also sounded the alarm. She too raised concerns about people becoming increasingly alienated from, rather than more connected to, one another with the advent of more and more devices in our lives[vii].

In my own life, I have only very recently taken very small steps towards the world of social media. Nevertheless, in a very short time – less than two years- I already find my attention pulled into a vortex from which I find it hard to retract.

People who know me with whom I have shared my bewilderment at my own behaviour change agree: How the mighty have fallen! I am very reluctantly seeing how, even in the short time and very limited ways I have chosen to participate in social media, I too am being pulled into this silo world of me-and-my-device. I even notice how I am sometimes more likely to text a friend now rather than make a phone call or arrange a phone date.

I was particularly humbled when I downloaded an app to monitor my screen time. I thought knowing how much time I was spending would suffice to make me change. It didn’t. While I was horrified to find I was spending much more time on my screen than I had realised, that was not enough of a deterrent. I then purchased another app, which enabled me to turn off my access to certain apps and sites after a time. Like any wilful, tantrumming two year old,  I noticed my frustration and drive to find a work-around to bypass the limit, despite the fact it was self-imposed!

I was astounded! Having started my journey with mobile devices in the mid-1990s with a mobile phone that was affectionately (and resentfully, by some of my friends) dubbed “The Stationary” because it was always on the charger at home and never with me, I hardly recognise myself.

I am reluctantly seeing how easily I too have slid down the slope of getting involved in this glittering, self-referential, self-reinforcing, self-inflating world of technology and screens. Having experienced first-hand the power of the addictive pull of the screen and the platforms it connects me to, I now see how it also separates me more from aspects of my life I value, from relationships I value, and how it provides an unhealthy reinforcement for aspects of my character I don’t want to encourage.

I do want to be connected. My personal life path is all about that- connection to myself/others/the world/ spirit. I want to help myself and others connect better with ourselves and others too. Like the research is showing elsewhere, however, I too don’t experience increasing use of technology as enabling the kind of connection I value. On the contrary. I have found it distances me from the values and people I value, while kidding me into thinking I’m connecting.

So if you’re also struggling with your screen use and feeling less than connected, here are some suggestions for you to consider-

And if, having read this article, you think you still need to address your relationship to screen, call me. Let’s get you your freedom back.

Price has great suggestions for resources in this book.