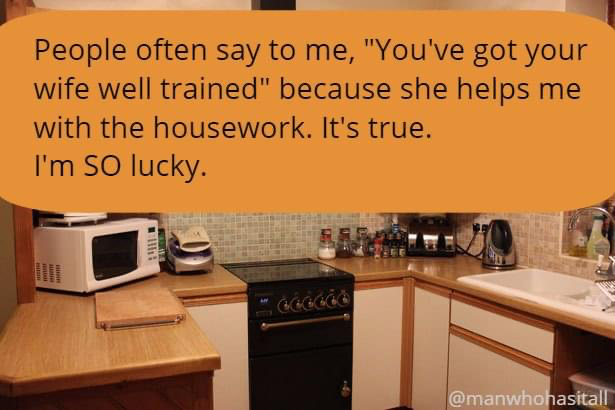 As a couple therapist, I constantly work with couples who fight about sex, housework and kids.

Typically, working with heterosexual couples, I hear women complain that the men don’t do enough or anything around the house or with the kids. They feel taken for granted, and they often say they feel they have an extra child (the man) to look after.

The men walk in saying they don’t feel appreciated for the help they do give and they say they are nagged. They talk about their busy jobs and how tired they are and they resent that sex is either non-existent or perfunctory.

I deal with such issues daily.

I suggest that the frame couples use to discuss these issues is a core part of the problem. Specifically, the frame of ‘help with parenting and domestic labour’ underpins what are universal couple issues and sets things up not to work from the get-go.

I talk to clients about cognitive framing and how it mentally sets us up – primes the brain to expect certain things and to ignore or blind us to others. A frame presupposes certain things as givens – in this instance, that kids and household tasks are a women’s domain, specifically women’s work. Frames build parameters for how an issue is viewed and discussed – if it can even be discussed. In doing so, they determine what and how something may be talked about, what can be expected – and therefore excluded – and prevent us from coming up with and considering alternative possibilities.

It follows that, whoever has the greater say over what frame will be used to examine an issue, will have the greatest chance of getting an outcome that advantages them. Framing men’s roles in relation to household tasks and child-rearing as ‘helping’ sets up a mindset that one person (the woman) has a role, a job: that of attending to the tasks that pertain to running the house and rearing children. In doing so, what goes unsaid but gets structured into expectations in many families and couples, is the assumption that the woman will be the one to do this job. This is likely to not be remarked upon because it’s assumed. it’s just considered to be ‘her’ job.

In addition, a widely influential frame that shapes many couples’ discussions is the frame that only paid work ‘counts’. Under this frame, the fact that domestic labour is unpaid adds to its invisibility. When I see couples where the man stays at home and the woman is the main breadwinner, I hear and see this frame play out, with those men echoing what I more commonly hear from stay-at-home women: they talk of feeling insignificant, and that what they do is not valued.

With most couples I see, men’s contribution to household and child-rearing tasks is divorced from context – such as the fact that the woman may have a paid job in addition to her homemaking and child-rearing contribution. Thus, issues of responsibility, fairness, contribution, the value of unpaid labour, or notions of pulling one’s weight in a household never become the subject of serious reflection and consideration.

Instead, a man’s contribution is set up to be framed as giving assistance on occasion as an act of benevolence. Thoughtful. Caring, even. Provided the man isn’t too tired or doesn’t have other things to do.

And men wonder why women become incandescent with rage when the discourse is set up that way? Do they wonder why women often rage about how infuriated they feel when men want praise for what they do around the house or with their own kids? Or when men want to be appreciated when they do contribute – often pointing out that they do more than ‘most men’? The women I meet in the couples I see don’t want to be helped – they want the load shared. The notion of ‘helping’ carries no connotations of responsibility or obligation. More insidiously, it connotes an optional choice to be kind, generous, to help another with *THEIR* work.  Women resent having discussions about household and child-rearing tasks framed around built-in assumptions that these remain the woman’s responsibility, at base. They don’t want to be the (only) one keeping the big household picture in mind all the time. They want the men to take ownership of that function for themselves as an ongoing, firm commitment on their part; one not dependent on their partner’s benevolence or mood. Or if he’s reminded.

That’s what’s sexy to them. That’s why research has shown that men who do ‘more’ housework report having more satisfying sexual contact with their female partners.

Domestic and family labour needs a different frame if we’re to challenge and hope to change the status quo between the genders over time.

Time to change the frame

For those tasks required to live – running a household, looking after relationships, and raising children – I suggest couples set the stage for a very different conversation by changing the language around that frame.

For a start, I like to talk about households as ecologies. An ecology or ecosystem implies that all parts are interdependent and impact on one another for their survival. The Oxford Dictionary defines ecology as a part of biology that studies the relations between organisms and their physical surroundings.

Viewed squarely through the frame of ecology, this allows us to ask – how would a man and woman relate differently about what needs doing in a household (to maintain its healthy functioning) if they were simply housemates? Similarly, how would two single-parent households which merged to share one space for economic (not romantic) reasons, address household and child-related tasks?

Whenever I put such hypothetical situations forward for people to think about, I’m amazed at how quickly both men and women respond, and the similarity of their responses.

Invariably, people describe shared tasks negotiated based on fairness, respect, and appropriate taking on of one’s own responsibility, while considering other people who share the space. It amuses and amazes me how remarkably similar men’s and women’s descriptions of how tasks of living together might be handled under such conditions. In the 21st century, in most Western cultures, once we remove the romantic/life partner piece like this, notions of fairness, contribution, and negotiated expectations become very clear.

With many couples, particularly if I meet them sometime after they have children, it’s as though a switch was thrown once children arrived, and the couple go from a fairly equal relationship contract to a modified form of the 1950s relationship contract. I say modified because, today, women often return to paid work after having children, yet still do the lion’s share of the tasks in maintaining the family ecology. Despite this, the rest of the 1950s model of division of labour in households largely takes over.

That speaks to how deeply entrenched our sexist patriarchal role expectations are in both genders’ minds once men and women form a family ecology.

It’s as though women themselves haven’t yet really internalised a solid sense of their right to be treated as true equals as a healthy part of their entitlement as partners.

This is not surprising when we still read so many articles and books about women ‘wanting to have it all’, referring to women wanting to have a career, a relationship and a family. This frame considers ‘wanting to have it all’, with its implied connotations of greed and putting an unfair strain on others (read: men) is a very specifically gendered frame. We don’t hear about men being seen as ‘wanting it all’ for pursuing a career, having a relationship and children and wanting it all to work out.  That’s because patriarchy has enabled male privilege to expect this as the norm – with women as the unnamed but assumed ‘staff’, making it possible for the men to ‘have it all’. When women reach for their version of what has always been accessible for men, in this frame, they are seen as overstepping their role, wanting too much, being unreasonable, or being selfish.

Most men I see present with no sense of real recognition that they are not equally sharing the load with regards to either the house or children. Nor do they readily admit that their behaviour amounts to exploiting their partner for unpaid labour.

In other words, most men I see haven’t internalised a sense of women being their true equals with the same entitlements, rights and privileges they accord themselves.

I always find it sobering to remind myself: on the whole, the men I see are prepared to come to therapy! Mostly, this group are, at least, willing to reflect on their own behaviour with the potential view of change, to build a better, more satisfying and intimate life!

I see a disconnect between aspiring to Western values of equality between the sexes, and how this breaks down when a hetero couple forms a family. I notice issues of inequality between the genders perpetuated in the difficulties that present almost universally in the dynamics between partners in the couples I see.

Once I’ve explored the basic flaws in the frame used by most couples who come to see me complaining about housework and kids, I propose we shift to a frame that more accurately describes a secure, functioning, fair (if they’ve confirmed that fairness is a value they hold as important) partnership.

I start with words like ecology/eco-system and community and then introduce words such as contribute, share, fair, share the load, instigate, plan, work, pull one’s weight. I ask them to consider the assumptions in the language we use and how they inadvertently reflect and perpetuate the prevailing mindset of inequality and male privilege.

I look at privilege and responsibility. I suggest people can’t expect the privilege of loving relationships, opportunities to enjoy rest and leisure time, a functioning household, a satisfying sex life, and secure and enjoyable connections with healthy secure children if they don’t take responsibility to share the daily work of creating and maintaining that kind of ecology.

Households need men to see the work that needs to be done, to think, discuss, and decide with their partner what is a fair contribution by each, and then actively do it, pulling their weight, sharing the load, so that the distribution of domestic labour is fair.

When the time comes for you to have conversations with your children about doing and sharing household jobs (see ‘From chores to life work’), your parenting will be much more effective because both of you will be practising what you’re preaching.

Some issues to consider

If you’re ready to address structural sexist inequality in your relationship, let’s start by considering:

If you want to address such issues with your partner (and then, with your children), and you think I might be able to help you with this, contact me.