After an affair is revealed, many people wonder if there is any point in engaging in counseling. As with most other relationship-specific difficulties, the answer is it “depends”.

One of the many relevant factors is how soon after the reveal a couple decide to seek help. Regardless of what may be the difficulties a couple encounter, research shows most couples seek therapy on average 6 years after the onset of the problem. Needless to say, as would be the case if one had left an infected foot for that long, the efficacy of therapy is likely to decline the longer you wait to seek help. For those who wait too long, couple therapy has an equivalent to the medical procedure of amputation – it’s called divorce.

I have found that those couples who come to see me soon after the reveal tend to be much more ready to address whatever underlying issues there were prior to the affair. Usually at this stage, both parties feel the urgency and gravity of what’s at stake. They are likely to only have had limited time to experiment with mentally exploring scenes of alternative scenarios for the future. I find that the tendency is to want to preserve the relationship, to address and repair what went wrong, and get things back on track.

For those couples who have waited longer before seeking help, or where an affair has lasted several years, then I find there tends to be a wider range of motivations. Some people realise what they could lose and heed the wake-up call, ditch the affair, both are more willing to address what wasn’t working that enabled the affair, and we set to work. This tends to be the case if there are young children under five. Others may be more focused on exploring alternatives to staying together.

An affair of long duration can be read by the betrayed partner as the other partner having already voted with their feet. Realising that an affair has gone on for some time can strengthen the betrayed partner’s mistrust as they contrast their own commitment with their partner’s deliberate deception and duplicity. For their part, the partner who has had the affair has likely been considering alternative partner/ future scenarios for some time before the reveal. This too can make them less interested in or hopeful that reconciliation might be possible.

As a couple therapist, people often tell me – “If I ever found out that my partner had an affair, that would be it! I’d leave them.” Bold words.. Bold, that is, until, as with many other things, we find ourselves confronted with exactly that in our own life. At that point, the rubber hits the road.

In my everyday dealings with clients and in the media, I hear many judgements of this kind pronounced about affairs. Opinions abound- “once a cheater, always a cheater”. “If I knew they cheated on me, I could never trust them again”. “I might stay with them, but the relationship will never be as good again”. 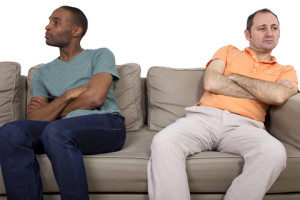 When I think about couples who come in to see me after an affair, I find that it’s usually impossible to predict who will stay together and rebuild their relationship successfully, and who will break up. While the designated person who got betrayed might come in raging at first and threatening divorce, I have learned the truth of the saying “it’s not over ’til the fat lady sings”. It really isn’t. I joke with my clients that, as long as it’s ME they’re coming to see and not a divorce lawyer, apart from the fact I’m less expensive, then I assume the other reason they come is that some part of both of them wants to see if some kind of repair might be possible. And that is usually the case.

When it comes to “degree of intent” involved in affairs, I have found a continuum exists – from the thoughtless, impulsive acting out of a one-off event at a party, all the way to the thought-through, carefully planned, deliberate choice of an ongoing affair, and everything in between. Affairs can be non-physical emotional affairs played out through social media or on email, purely based on sex, or a mix of emotional and sexual.

In determining whether a couple could or should rebuild after an affair is revealed, many factors need to be taken into account. While the degree of planning/ intention and duration of the affair matter, as does whether it was a one off contact or a more involved emotional/ sexual relationship, these are not the only or the main factors that should be considered.

Many other factors also play a significant part. Here are some of the factors I look for when I meet with couples after an affair-

1. does the betrayer feel what they did was wrong and do they genuinely feel bad for breaking their own moral code?

2. Does the betrayer take responsibility for their actions and the pain they’ve caused their partner? Are they willing to be accountable for what they’ve done and accept their partner’s need to question them and revoke their “privacy privileges” accordingly?

3. Are both partners willing to be courageous and have the difficult conversations they didn’t have before and during the affair – about both the affair details themselves as well as other aspects of the relationship that may never have been discussed before? That means asking and being asked hard questions, as well as listening to painful/ provocative things. For both people.

4. Is the betrayer aware of the pain they’ve caused their partner and do they visibly feel bad about it? Does the betrayer feel and demonstrate remorse for their actions, and show a desire to repair the relationship?

5. Is the betrayer willing / able to consistently engage in effective repair strategies to rebuild damaged trust? This includes accepting it will take the time it takes to work through the betrayal.

6. Is the person who feels betrayed willing to entertain that there may well have been pre-existing issues in the relationship that made the relationship vulnerable to an affair? Are they willing to address and work towards remedying these as genuine issues, notwithstanding the betrayal being real?

7. Is the person who had the affair able to demonstrate consistently the necessary behavioural change that suggests changes made are likely to last?

8. Eventually, is the person who was betrayed able to accept and forgive, fully cognisant of what their partner did in the past, yet able and willing to discern genuine change when they see it?

9. Is the person who was betrayed able and willing to make relevant changes of their own as part of affair-proofing the relationship for the future?

10. In time, does the relationship start to operate as a secure functioning relationship – one based on principles of fairness, justice and sensitivity where mutual respect, care, kindness, understanding, love and desire flow back freely in the relationship as a result of the truthful and sincere communication and effective repair strategies that  partners have engaged in?